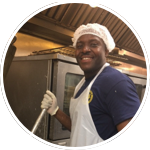 Prince Awuah tells the story of the lion and the elephant.

“The elephant is maybe 10 times the size of a lion, probably smarter than the lion. He can kill a lion with one step, but the lion sees the elephant as food,” says Awuah, a native of West Africa. “It's the lion's attitude that makes them, what? The king of the jungle!”

Awuah sounds more like a blend of motivational speaker, TED Talks star, and inspirational preacher than the scientist he is—a toxicologist/biologist at the U.S. Food and Drug Administration and a commissioned officer in the U.S. Public Health Service corps.

Awuah holds a doctorate in pathology/experimental pathology from the University of Pittsburgh School of Medicine, where he was one of only a few Black students among about 80. He was a postdoctoral fellow at the National Institutes of Health, and he won two NIH graduate-research grants.

He traces his successes and leonine dynamism to his upbringing in Ghana.

“I saw people dying from liver cancer, from different diseases that I felt like could have been treated if the technology or the knowledge base was more advanced,” he says.

From his paternal (and strict) grandparents, David Kingsley Awuah and Maame Fosuah, he learned how to exploit challenges.

“We didn't have much, but people were driven to want to achieve more,“ Awuah says. “Growing up in that environment, I didn't see the lack of having money as a disadvantage, I saw it as a way for me to figure out how to achieve those things.”

His entrepreneurial spirit kept growing after he moved here when he was 10 to be with his parents, Bernard and Rosina. His father, the fourth of 15 children, owns a limousine service.

Sure, Awuah acknowledges persistent obstacles but, he says: “To be Black, African-American, yes, I feel like we are underprivileged in many ways, and we have a lot more to overcome, but that should be the impetus, that should be the thing that drives you to want to achieve more.”

In addition to his science bona fides, he is a licensed financial advisor, presenting seminars in churches, high schools, and colleges to help people become financially literate and build generational wealth.

“I want to expand and level the playing field, to be able to help the underprivileged achieve the same goals as our white counterparts,” he says.

In addition to working with such programs as Maximizing Access to Research Careers, he’s a cross-generational mentor. He gives shout outs to some of his mentors: Satdarshan (Paul) Monga, MD, Director at the Pittsburgh Liver Research Center; Mark Sobel, MD, PhD, former executive officer of the American Society of Investigative Pathology; and Kelly Mack, PhD, vice president for undergraduate STEM education and executive director of Project Kaleidoscope at the Association of American Colleges and Universities.

Awuah also credits FASEB’s networking and travel opportunities: “Every person in the biomedical science field should plug into FASEB.”

And he’s a community volunteer, especially through his role as a lieutenant in the USPHS corps. For instance, he has participated in the So Others Might Eat (SOME) program to prepare and service meals to individuals who experience homelessness.

“We are committed to public health through compassionate actions and stewardship of time, resources, and talents.

Through all of his outreach efforts, he sees how the global scientific community could do a better job of communicating.

“Let's stop trying to be geeky and trying to appear so smart,” he says, “because the only way you can make an impact on somebody is to be able to relate to them.”

Awuah is nothing if not relatable. He also refuses to be pigeonholed.

“You can never put me in a box because the moment you do that, I spring out of it,” he says.

And, winding down an hour-long interview brimming with enthusiasm, he adds: “I want to become a better person, to improve, to pursue more. I want to grow and learn, to grow my intellect. To me, adversity and challenges are a gift from God to push you to achieve your next level of who you're supposed to be.”